Google Plus is the next big thing for businesses 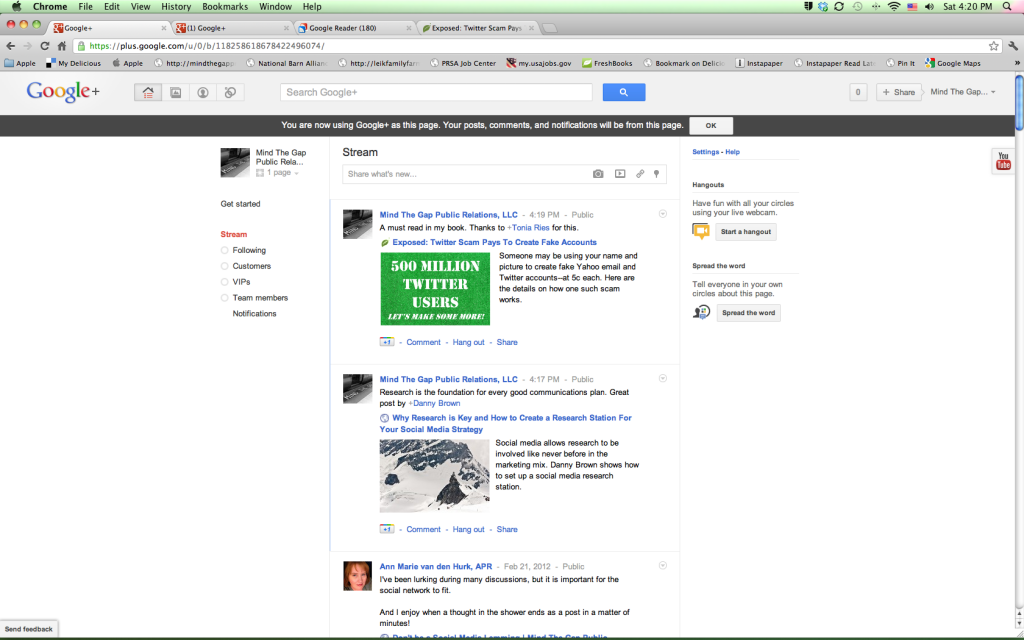 Is Google+ a plus or minus for businesses?

Despite concerns about its popularity, the social network can be very beneficial for your company, if for no other reason than it offers you another search result.

After all, where do you go to search for something online? Google. What is the most used video sharing platform? Google’s YouTube. To where does your blog feed post? Google Reader. Google connects them all, searches them all and offers you a chance to better connect with your customers.

Launched last year, Google Plus (or Google +) was initially viewed by many in the tech world as the slayer of Facebook, which has seen detractors concerned about privacy and clutter.

In its first month while still not available to all people, Google+ boasted 20 million users. To put that into perspective, it took Twitter and Facebook about three years to reach that number. Google+ was attractive because it offered a clean interface for connecting and sharing content, and users could tailor who they shared information with using the company’s innovative “circles” feature.

Fast forwarding from July, Google+ has now reached 90 million users. It’s still far behind Facebook and its 845 million users and Twitter and its 200 million, according to online data provider The Realtime Report.

So who are those Google+ users? At first glance, they seem to be predominantly tech-oriented men. But that’s changing. In a recent survey, Jim Long, founder of consultant Verge New Media, suggested men only slightly used the platform more than women. He also found that 36 percent of users post to their Google+ pages daily. Among his other findings were that 31 percent of users said they get considerably less response on Google+ than other social networks and 26 percent hear crickets.

With that in mind, is it worth it for your business to create a Google+ page, an offering that began in November?

Lexington-based Lexmark International launched a page last year and has been active ever since, posting about products as well as quirky events like the recent speech by Apple co-founder Steve Wozniak to the company’s Perceptive Software subsidiary.

Being an early adopter of Google+’s business pages has allowed Lexmark to establish connections with early adopters and gain a positive presence, said spokesman Jerry Grasso, who feels the service is poised to be a successful alternative to Facebook in the future.

He said it’s a lot like the Kevin Costner film Field of Dreams. If Google builds it, the audience will come.

And as larger audiences spend time on the service, it shows that companies should have a presence since that’s where their customers are, said Mana Ionescu, president of Chicago-based social media company Lightspan Digital.

But that doesn’t mean it has to be a business page. A small business owner who is the face of the company could be better off just having an active personal page. You’ll be able to interact with more people and build relationships more quickly.

Ionescu also identified two unique benefits to Google+. First, Google search results now show the “+1” that’s similar to Facebook’s “Like” feature. Users can see if one of their friends shared your content on Google+, and most search results will show how many times the content received a +1.

Also, because of the “circles” feature that establishes groups, you can better target subsets of customers. You can share insider news with your circle of existing customers, but you can also share a special offer with only potential customers. This level of targeting is not available with any of the other social networks.

Ionescu interestingly points out most people compare Google+ with Facebook; when in fact, the social network is more like Twitter when it comes to interacting. The more you engage people by commenting and sharing their posts, the more you’ll find that they do it in return. If you just broadcast your own topics and miraculously expect audiences to find you, there will be nothing but silence.

Google+ also makes it easy to mention people and tag them to get them actively involved. Use that freely. This is very effective at getting people’s attention and starting conversations. Conversations are how engagement begins, so talk to people and they will talk back.

And you’ll find more and more of them in the future, because as Lexmark’s Grasso put it, Google+ is the field and people will come.

This was originally published in the Lexington Herald-Leader on Monday, February 27, 2012.

This site uses Akismet to reduce spam. Learn how your comment data is processed.